In order to get a successful learning system, it should be designed for a proper design, several steps should be followed.

Why we need to follow steps because in order to get perfect and efficient system.

Weather the training experience provides direct or indirect feedback regarding the choices made by Performance system.

Of which learners (person who undergoing training) will control the sequence of training. 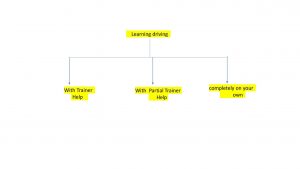 How well it respond the distribution of example aver which Performance of final system is measured more possible combinations, situation.

First we need to chose the target experience, what type of knowledge is leaner and how it is used by the performance system

It contains the legal moves from any board, the program how to choose the best moves among them legal moves

How do you assign the Value of b

b Is the final board state that is draw, then V(b)=0

b^’- Is the best final state

Choosing a Representation of Target Function

For any board state (b), we calculate function ‘c’ as a linear combination ( the degree is 1 ), of following board features

x_1= Number of black pieces on board

x_2= Number of red pieces on board

x_3= Number of black king pieces on board

x_4= Number of red king pieces on board

x_5= Number of black pieces threatened by red, the black which can beaten by red

x_6= The number of red pieces threatened by black

Linea function representation in the form of

w_1—–w_6=Numerical weights for each and every features

w_0=Called additive constant to the board value

Choosing a learning for approximating the target function

Here we are learning an algorithm for approximate the target function

Board state is represented by b

Training value is represented by V_train (b)

Training Example is represented in the form of

Example: the number of black coins to win the game x_2=0

We need to do 2 steps in this phase

In each and every steps we need to estimate, in every step we need to consider the successor, depending upon the next step of the opponents, assign a value to successor it represents the next board state.

It will estimate that this move will help or destroy opponents

We will be using some algorithms to find Weights linear function. Here we are using LSM ( Least Mean Square) it is used to maximize the error

If error = 0 we need to change weight

If error is positive each weight is increased is proportion

If error is negative each weight is decreased is proportion

In the final design we have four different modules

Any new problem taken as input , output will be solution trace ( grace history) this kind of problem is that previously, what happened that will be output for the Performance system.

It will take input as the previous history by the performance system generator an output regarding the training example.

Generalizer it will take input as a training example, it will generate a hypothesis ( is nothing but an imagination) ,

It will maximize the experiment Generator.